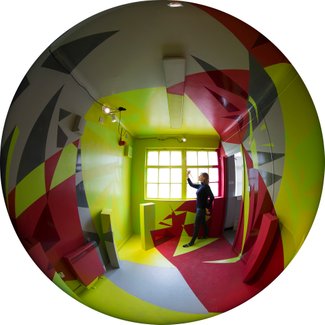 Rhona Taylor is a multi-disciplinary artist whose work includes installations, painting, printmaking, photography and sculpture.   Before studying painting at Edinburgh College of Art, she worked for several years as a newspaper journalist, and all of her artwork is strongly rooted in stories and storytelling.

She makes work in response to particular places, often in areas that are perceived as remote or isolated, and the people that live and work there. She’s particularly drawn to the sea, coast, islands and the extreme reaches of land, and researching how those places influence and affect notions of identity. She is also interested in ideas around belonging, separation and outsiders.

Much of her work looks at the journeys and voyages people make, and the boundaries and transitions of place and time. She’s interested in researching the history and memory of different places, and is attracted to locations that can be quietly unsettling.

Born in London in 1975, Rhona Taylor studied modern languages at the University of Liverpool before moving to Dublin. After returning to London, she worked as a news and arts journalist for several years before moving to Scotland, and completing her BA (Hons.) in painting at Edinburgh College of Art in 2013.

She now works from her studio at Wasps in Edinburgh as well as at Edinburgh Printmakers. In 2017 she was selected for a two-month residency on the north coast of Iceland, as well as for Cove Park’s first subsidised winter residency for emerging artists. She has also been artist in residence at Port Edgar Marina and the Human Genetics Unit at the University of Edinburgh. In 2016 she organised a group exhibition in the cells of a Victorian former prison in Campbeltown, Argyll.

In 2020 she was awarded Creative Scotland VACMA funding to undertake a residency with SÍM, the Association of Icelandic Visual Artists, which is now due to take place in May 2021.

She is Vice-President of the Society of Scottish Artists, a member of Visual Arts Scotland, and a Fellow of the Royal Society of Arts.